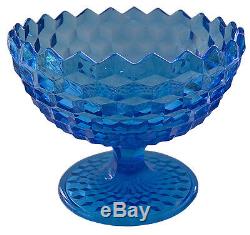 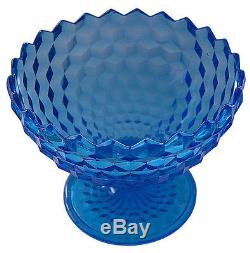 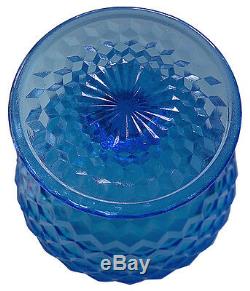 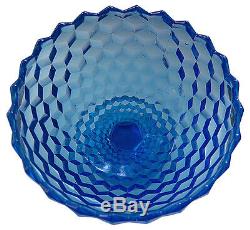 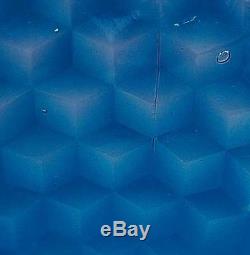 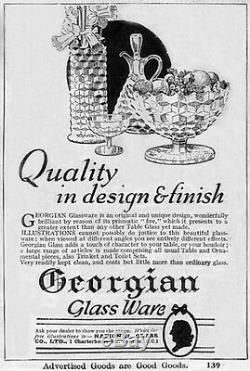 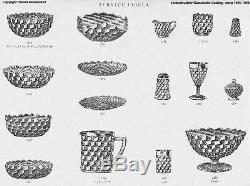 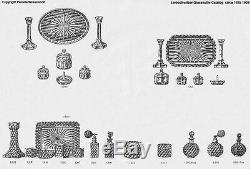 RARE Blue Footed Cube Punch / Fruit Bowl. Company Maker: The Fostoria Glass Company /Libochovice. Item: Footed Punch Bowl / Footed Fruit. WE ARE PLEASED TO OFFER FOR SALE A RARE American footed PUNCH BOWL in blue. These bowls are commonly found in crystal. The colored ones are extremely rare, and were actually made in the 1920s when Fostoria American was first being made. These bowls were produced outside of the United States and were imported into England. There has been some confusion about the provenance of these bowls. There were two molds used to produced this style bowl.

The flared shape was made by Fostoria. Sidney Seligson listed the straight-sided bowl as an extremely rare piece of Cubist. In light of what is knonwn about the production of the Jeannette Glass Company and the Cubist pattern this is considered highly unlikely. The production of the unusual pieces of American that have been coming from England can be attributed to the. Liebochwitzer Glashütte of Czechoslovakia (known as Libochovice Sklarny after World War II).

We have gathered information from all the available sources that we can find and can offer the following information. The American pattern was very popular in England and our buyers have been bringing many rare and unusual "American" pieces back from England for the last 40 years. The English Good Housekeeping ad shown above indicates that The National Glass Company LTd.

Was the major English importer and distributor of this pattern. Through most of the 1920's English consumers mixed the glassware from these two sources and later American collectors did the same. However, some of the pieces pictured in the catalog appear to be identical to those made by Fostoria.

This has led some researchers to believe there may have been a license agreement that authorized this very similar production, but we are not able to confirm this. We have pictured the Good Housekeeping ad and two of the Liebochwitzer Glashütte catalog pages that feature some of the "American" style pieces that are collected by today's Fostoria American collectors. These pieces blend well with Fostoria American and are a very important part of the history of Fostoria American collecting. This catalog, and the ad from The National Glass Company LTd. These cube patterns produced by both companies have been collected. By Fostoria American collectors for many years. Condition: This outstanding piece is in Perfect Condition without chips, cracks, or major mold damage.

It has beautiful clarity, however like many pieces of American this size, there are some small bubbles trapped in the glass. There is a small open bubble on one of the cubes at the top of the bowl (which we h ave blown up and enhanced for you to see).

This bowl was made this way. It is not damage but it is there. Since there are only a couple of these bowls have ever been found in blue it is an acceptable flaw in the making. Description / About: Fostoria Amerian / Cube Footed Punch Bowl. American - Fostoria's No. 2056 crystal American pattern was introduced in 1915. The number of pieces in the pattern was expanded continuously through the years.

During the 1920's color was introduced into the Fostoria line and some pieces of the American pattern were also made in color. The known colors of early American include amber, aqua, dark blue, canary, ebony, green, jadeite, lavender and yellow. Some pieces were also produced with ruby flashing.

Production of some American pieces continued from both original and modified molds for the Fostoria outlet stores. Check out our other merchandise at. K and M Antiques and Collectibles. We feature older, vintage antiques and collectibles. Sign up for my newsletters.

Be sure to add me to your favorites list. Come by and visit often! IF NOT PLEASE ADD ALL ITEMS TO THE CART AND WRITE US BEFORE PAYING FOR YOUR ITEM AND WE WILL SEND YOU A REVISED INVOICE. Merchandise is guaranteed as stated in the description. All items are carefully examined before listing & again before they are packed. The item "Fostoria American / Libochovice RARE Blue Cube Footed Punch Bowl" is in sale since Tuesday, February 4, 2020. This item is in the category "Pottery & Glass\Glass\Glassware\Elegant\Fostoria\American".